Our research on Quaternary climate and environmental change focuses on the analysis of natural archives of past environmental conditions, including tree rings, sediments, soils, speleothems, and glacial geomorphic features, together with archaeological remains. With funding provided by the Office of Research, we are pursuing seed projects to build preliminary datasets in support of proposals for external grant support. We describe selected seed projects below. 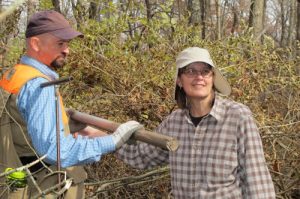 With seed project support from our initiative, IQPR faculty and students are investigating the sediments of wetlands and ponds in Tennessee, North Carolina, and Georgia, looking for sites that could yield important new records of past climate and human-environment interactions. The photograph shows Matt Boehm and Sally Horn during test coring of a small pond on the Domain of the University of the South, in field work with IQPR faculty member Jan Simek and Professor Sarah Sherwood of the University of the South. 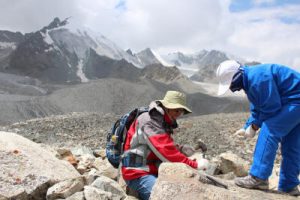 In this seed project in summer 2012, IQPR GRA Yanan (Nancy) Li and her advisor Yingkui (Philip) Li visited four field sites in eight glacial valleys in the Tian Shan mountains of China. Their objective was to collect rock samples from boulders on latest Holocene moraines that can be dated using cosmogenic nuclide analyses in the laboratory Dr. Li is developing for this purpose. The IQPR contributed to this project by funding Yanan as a GRA during Spring and Summer 2012, when in the field in China and while visiting the Purdue Rare Isotope Laboratory, where she gained laboratory experience in cosmogenic nuclide dating to support this seed work. Field expenses for the summer work were covered by a National Geographic Young Explorers Award to Yanan, and by funds to Yingkui from the Chinese Academy of Sciences. 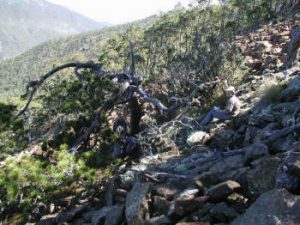 James Speer (left, underneath tree) and Ken Orvis inspect a Caribbean pine high in the Cordillera Central of the Dominican Republic. These trees form the foundation of our efforts to extract climate information from the tree-ring isotopes found in the wood.

Intra-annual tree-ring isotopes of Caribbean pines (Pinus occidentalis) from the Dominican Republic are being investigated in the Stable Isotope Laboratory of the Department of Earth and Planetary Sciences to study climate seasonality and climate events, especially tropical cyclones. About 1000 stable isotope samples have been analyzed to date, at a temporal resolution unmatched in previous research. This preliminary study has provided very promising results for investing seasonal climate change that extend further back before instrument records were kept in the region of Caribbean. Members of the IQPR will eventually extend this research to other subtropical locations in the circum-Caribbean region where tree-ring samples already have been collected, including Abaco Island in the Bahamas and several islands that make up the Florida keys. 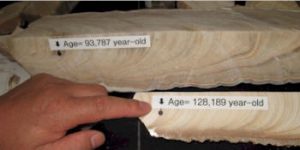 Pollen assemblages in lake sediments in the Southeastern U.S. provide evidence of past vegetation, which can be used to infer paleoclimate. Most lakes, however, are relatively young, and only a very few pollen records reach beyond the last glacial maximum ca. 20,000 years BP. In a seed project for our Initiative for Quaternary Paleoclimate Research, we are investigating the pollen content of cave stalagmites from the region that date to earlier periods of the Quaternary, including the last major interglacial period. Stalagmites, stalactites, and flowstones (together known as speleothems) are secondary mineral deposits formed by chemical precipitation in limestone and dolostone caves. Those we are studying were collected by IQPR faculty member Zheng-Hua Li from caves in the southern Appalachian region for the development of stable isotope records of paleoclimate funded by NSF grant #0822824. McGarry and Caseldine (Quaternary Science Reviews 23, 2004) referred to pollen analysis of speleothems as an “undervalued tool in Quaternary studies.” Our seed project will reveal the extent to which the technique can extend vegetation and climate reconstructions from lake sediments in the Appalachian region. 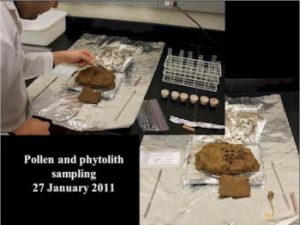 In the summers of 2010 and 2012, teams researchers and students under the direction of David Anderson (University of Tennessee), D. Shane Miller (University of Arizona), and Tom Pertierra (SEPAS, Inc.) have conducted exploratory archaeological and paleoenvironmental survey and data collection along the Cumberland River immediately west of Nashville (to locate and document deeply stratified archaeological sites and associated paleoenvironmental data. Materials dating from the Late Pleistocene, initial human settlement of the region through the later Holocene were collected and indicate it is possible to examine evidence for human occupation, climate, and biota in the study area from ca. 15,000 to 3,000 cal yr BP. IQPR seed projects include analyses of pollen by IQPR GRAs Matthew Valente and Matthew Boehm, and stable isotope analyses of mid-Holocene age shell deposits by IQPR GRA Matthew Kerr and Adjunct Professor Chad Lane to determine their potential as paleoclimate archives. These analyses complement analyses of phytoliths by UT Archaeological Research Laboratory scientist Calla McNamee and of carbonized charcoal by UT Anthropology Ph.D. student Stephen Carmody, and shell midden formation and contents by UT Anthropology PhD student Thaddeus G. Bissett, with results used as preliminary data in proposals for future funding. Sample documentation included exposure and photography, followed by removal of areas covered by rocks en bloc to preserve the soil underneath undisturbed for microfossil analysis. In the laboratory, the en bloc materials were carefully opened and samples were then collected for pollen and phytolith analyses (figure below).

Pollen and Other Proxy Indicators in a Chinese Lake Sediment Core 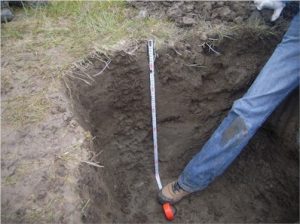 A sediment core being taken from a former lakebed in the Tian Shan of China.

In this seed project, we are studying pollen assemblages and other proxy indicators, such as grain size and stable isotope ratios, in a 1-m long test sediment core collected by IQPR faculty member Y. Li from a lake dammed by glacial moraines in Tian Shan, China. This site could potentially provide a unique record of climate and environmental change since the last glaciation in this critical area of Central Asia. The seed project will provide the preliminary data to justify a future proposal, to be written together with colleagues in China, for more field and lab research. 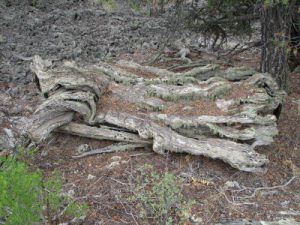 An extremely old remnant of what used to be a Rocky Mountain juniper found lying on the lava flows of El Malpais National Monument, in New Mexico.

The American Southwest has been intensively sampled to develop millennium-length tree-ring chronologies for reconstructing past climates through the late Holocene, but researchers have not been able to push this record back beyond about 2,100 years. We recently initiated a project partially funded through the IQPR to process cross sections from Rocky Mountain junipers collected at El Malpais National Monument in New Mexico. In only the first 10 samples, IQPR graduate student Nancy Li has developed an initial tree-ring chronology for this species already dating back to AD 287, and a major goal of this IQPR project will be to break the BC barrier and extend the tree-ring record of past climate for the American Southwest by almost 1000 years to 1000 BC. This will extend our knowledge on the impacts of longer-term oscillations in climate that affected Native Americans during the Archaeic Period.

The flagship campus of the University of Tennessee System and partner in the Tennessee Transfer Pathway.